J. Pollack – it’s a distinctive signature frequently seen on British pulp fiction paperbacks of the mid twentieth century (at least if you can find them) – a stylish, clever, sought-after and readily recognisable commercial artist – although I’ve never come across any kind of account of Pollack himself. Another case of having to delve into the archives. 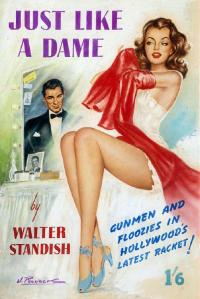 Pollack’s work would of course scarcely pass muster these days: at first glance these designs seem to represent the very worst of what we have come to know and understand as the objectification of women – although that may be a slightly facile view.  Look again, click to enlarge, and these Pollack women are invariably self-possessed, self-assured, knowing and strong – we somehow know from the outset that it is the stiff-lipped, chiselled and puzzled tough-guy men, even more tightly corseted into stereotypical characteristics and behavioural expectations, who are probably going to end up as victims. 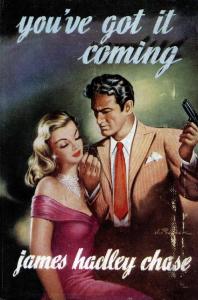 The 1940s and 1950s are nowadays a far-off world – a world where men were men, etc. – cruder perhaps, certainly rather less sensitive, but also far more innocent, happily more reticent, and by no means without subtlety.  Always wrong to judge out of context.

But who was J. Pollack?   A local man as it turns out – John Pollack, born within walking distance of here in South London, on 27th May 1918 – the second son of Montague John Pollack (1882-1959) and his wife Elsie McCulloch (1886?-1952), who had married in 1912.  His father, apparently known as Monty in the family, had been a musician before the war – something of a youthful prodigy on the cello in the 1890s – and more recently a rifleman in the 3rd Rifle Brigade, awarded the British War and Victory Medals.  His own father, Oscar Pollack, was a Prussian-born professor of music and language who had settled

in Birmingham with his Austrian wife, Melanie Thekla Amalia Johanna Huschell, the couple having married at the British Embassy in Vienna in 1880. Melanie Pollack was a fine singer and to judge from the local newspaper coverage the Pollacks’ annual concerts were quite a feature in the Birmingham life of the period.

John Pollack’s mother, Elsie McCulloch, was the daughter of Allen McCulloch, a Scottish doctor who had settled with his Chester-born wife Jane Griffith at Tarporley, where Elsie was born and raised.

Records are scant, but the family were living at 188 Elmhurst Mansions, Edgeley Road, Clapham,  close to Clapham High Street station, both before and after the Second World War. 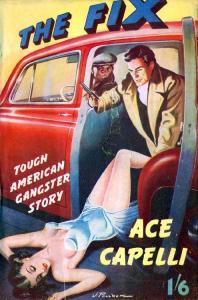 I’ve not uncovered anything of John Pollack’s schooling or training but by 1947, still living with his parents, he was advertising himself as a commercial artist in the London telephone directory.  In 1948 he married the nineteen-year-old Betty Leggatt, daughter of George John Leggatt – a barrister’s clerk at the time of his marriage to Sarah Ann Wheeley in 1914. 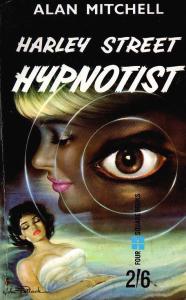 The
married couple lived with John’s parents at Elmhurst Mansions at least until Elsie Pollack’s death in 1952, later moving to 4C Elms Road, opposite Clapham Common, and then – by 1965 – slightly southwards again to 19 Lycias Road, a quiet street of bay-fronted terraced houses south of the Common.

John Pollack’s working style clearly developed over the years, as is evident from the 1960 cover for “Harley Street Hypnotist”, but I’ve not come across many of these later examples. He died aged sixty-six in February 1985, his widow surviving him for twenty years or more.  That is about as much as I have been able to uncover – but I believe there were a couple of children, certainly some nephews – any further information gratefully received and acknowledged.

Laurence Worms has owned and run Ash Rare Books since 1971. He represented the antiquarian book trade on the (British) National Book Committee from 1993 to 2002 and has been six times an elected member of the Council of the Antiquarian Booksellers’ Association. He was largely responsible for drafting the Association’s Code of Good Practice first introduced in 1997 (and its recent update), served as Honorary Secretary of the Association from 1998 to 2001 and as President from 2011 to 2013. He is a former member of the Council of the Bibliographical Society and continues to serve on the Council of the London Topographical Society. He writes and lectures on various aspects of the history of the book and map trades, and has lectured at the universities of Cambridge, London, Reading and Sheffield, as well as at the Bibliographical Society, the Royal Geographical Society, the Warburg Institute, the National Library of Scotland and at Gresham College and Stationers' Hall. He teaches annually at the London Rare Book School, University of London. Published work includes the compilation of fourteen ‘lives’ for the “Oxford Dictionary of National Biography”, a number of articles for “The Oxford Companion to the Book” and the chapter on early English maps and atlases for the fourth volume of “The Cambridge History of the Book in Britain”. Essays on the British map trade are also appearing in “The History of Cartography” published by the University of Chicago Press. His long-awaited “British Map Engravers”, co-written with Ashley Baynton-Williams, was published to critical acclaim in 2011. He also contributed the numerous biographical notes to Peter Barber’s hugely successful “London : A History in Maps”, co-published by the British Library and the London Topographical Society in 2012.
View all posts by Laurence Worms - Ash Rare Books →
This entry was posted in Book Collecting, Pulp Fiction and tagged Book collecting, John Pollack, Oscar Pollack. Bookmark the permalink.