“Do you not twitter Gentlemen?” – what’s this then, a line interpolated into Shakespeare to bring him up to date and make him ‘relevant’?  Well, yes, that’s actually more or less what it is.  It’s a line from a fresh prologue written for “Othello” in 1660 to announce the fact that for the very first time Desdemona will be played by a real woman and not a “man in gown, or page in petty-coat”.  Although the general tenor of her introduction to the twittering gentlemen perhaps reminds us of how sage Noël Coward was in his advice to Mrs Worthington on the advisability of putting daughters on the stage, it’s now flagged up in the latest British Library exhibition as one the ‘iconic’ moments in the four-hundred year history of all things Shakespeare – “Shakespeare in Ten Acts”.

Vivien Leigh (as Titania) from A Midsummer Night’s Dream at The Old Vic Theatre, 1937. Photograph by J. W. Debenham. Courtesy of the Mander and Mitchenson Collection at the University of Bristol and ARENApal http://www.arenapal.com.

It’s a commonplace that each generation reinterprets Shakespeare in its own way – and this exhibition certainly does that.  The exhibition notes are full of phrases like ‘institutional sexism’, ‘struggle for racial diversity’ and ‘creative reuse of film and digital media’.  Much of it tells us far, far, more about ourselves and our own crises of conscience and confidence than it does about Shakespeare, the theatre, and the nature of acting and illusion.  And much of it left me cold.  Inexplicable to me that in an overview of the twentieth-century global impact of  Shakespeare there should be no mention (unless I missed it) of the 1930s Paris production of “Coriolanus” which caused riots in the streets.  In fact there doesn’t seem to be much mention of the Roman plays at all – ‘small Latin and less Greek’ in our schools these days.  No mention either that I could see of Tom Stoppard’s breathtakingly brilliant “Rosencrantz and Guildenstern”, which must surely be at the top of anyone’s list of twentieth-century takes on Shakespeare.

But it doesn’t really matter at all what I think about some of the later ‘acts’ of the exhibition, because you are going to have to go and see it anyway for its opening riches.  A first folio – yes, of course – that seemingly least rare of rare books. 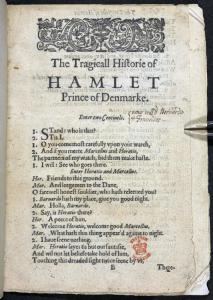 But also the first quarto of “Hamlet” (1603) – one of just two known copies.  The first quarto of “Lear”.  The first edition of “Love’s Labours Lost” (1598) – the first book to have Shakespeare’s name on the title-page: a particular joy for me, this one – it was published by Cuthbert Burby, one of my remote predecessors as a bookseller with a shop in the Royal Exchange.  And there are extraordinary manuscripts too: Richard Baines’ damning deposition on the alleged atheism and perhaps worse of Christopher Marlowe – how truly shocking to see it – written just days before Marlowe’s death; John Manningham’s contemporary diary with a highly scurrilous and, one hopes, apocryphal story about Shakespeare, Burbage and the groupie.

And above all – way above all – the only surviving lines of theatrical dialogue in Shakespeare’s own hand: Shakespeare writing lines for Sir Thomas More as he faces down the mob  in a wholesale revision of a play by Anthony Munday probably never performed – still a toxic subject, as the censor’s notes make clear – “Leave out the insurrection wholly and the cause thereof”.  Anne Boleyn’s daughter was still on the throne when Munday wrote it.  But what a loss to our understanding of the period. This is simply electrifying.  Go.  Stand.  Admire.  Pay homage.  Revere.

Laurence Worms has owned and run Ash Rare Books since 1971. He represented the antiquarian book trade on the (British) National Book Committee from 1993 to 2002 and has been six times an elected member of the Council of the Antiquarian Booksellers’ Association. He was largely responsible for drafting the Association’s Code of Good Practice first introduced in 1997 (and its recent update), served as Honorary Secretary of the Association from 1998 to 2001 and as President from 2011 to 2013. He is a former member of the Council of the Bibliographical Society and continues to serve on the Council of the London Topographical Society. He writes and lectures on various aspects of the history of the book and map trades, and has lectured at the universities of Cambridge, London, Reading and Sheffield, as well as at the Bibliographical Society, the Royal Geographical Society, the Warburg Institute, the National Library of Scotland and at Gresham College and Stationers' Hall. He teaches annually at the London Rare Book School, University of London. Published work includes the compilation of fourteen ‘lives’ for the “Oxford Dictionary of National Biography”, a number of articles for “The Oxford Companion to the Book” and the chapter on early English maps and atlases for the fourth volume of “The Cambridge History of the Book in Britain”. Essays on the British map trade are also appearing in “The History of Cartography” published by the University of Chicago Press. His long-awaited “British Map Engravers”, co-written with Ashley Baynton-Williams, was published to critical acclaim in 2011. He also contributed the numerous biographical notes to Peter Barber’s hugely successful “London : A History in Maps”, co-published by the British Library and the London Topographical Society in 2012.
View all posts by Laurence Worms - Ash Rare Books →
This entry was posted in Exhibitions, Libraries and tagged British Library, Shakespeare in Ten Acts. Bookmark the permalink.