Away to Scotland for a rather special rare book trade occasion last week.  A retirement party for our old friend Elizabeth Strong (McNaughtan’s Bookshop) – not just a retirement party but also a welcome party for Derek and Anna Walker, who are taking over this much-loved bookshop on Haddington Place from Elizabeth. 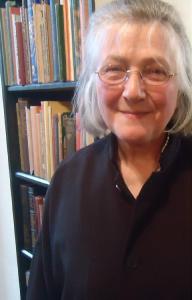 A big day for her, but perhaps an ever bigger one for them. The closing of one era, the opening of another – a passing on of the baton from one generation to the next.  A time for celebration.  A time for reflection.  A goodish crowd of bookish folk.   Edinburgh stalwart Ian Watson (John Updike Rare Books) was there.  Cooper Hay had come over from Glasgow.  Andrew Hunter (Blackwell’s Rare Books) was up from Oxford.   Family, friends, customers.  A few choice words from our president, Oscar Graves-Johnston.  A few words of farewell, welcome and introduction from Elizabeth.  A few words of appreciation and anticipation from the Walkers.

I’m personally not at all sure about this ‘retirement’ business.  Do booksellers actually do this?  How does it work?  What do you do all day?  I don’t fully understand a lifestyle which doesn’t revolve around books.  I can’t bring to mind too many booksellers who have retired (or indeed could afford to), although Peter Miller (also present) is one.  He too, like Elizabeth, has taken to painting as an alternative to bookselling (a number of Elizabeth’s pictures were on display).  I remain mystified, but, ah well, different strokes for different folks, I suppose.  Let us wish them well and all power to their paintbrushes.

The evening slowly adjourned to a nearby restaurant, where about twenty of us sat down to continue to talk books and other matters.  My mind drifted back over the years to when I first took over an existing bookshop – and all the decisions it entailed. You obviously don’t want to alienate the existing customers: they are the food on your table.  So, gently does it in terms of making changes.  I was too young (just twenty-three) to have any particular notion of  how I wanted  to set my own stamp on the business, so I suppose I just let the business evolve in its own way for the first few years.  But of course what I did not fully realise that many of the existing customers were going to become alienated anyway, not because I changed anything (beyond repricing the books priced in shillings and pence into their decimal equivalents, a change which the rest of the country had adopted somewhat earlier), but because I was simply someone new, someone different, someone young.  What I also did not realise is that any existing bookshop will also have a great many ex-customers, who have slowly drifted away over the years, not necessarily for any particular reason beyond perhaps an over-familiarity with the existing set-up – the way we all neglect the over-familiar and the ever-present.  These are customers that can be lured back.  With hindsight, I could and should perhaps have been braver in making changes. 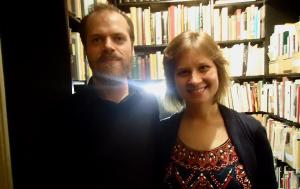 I like the look of Derek and Anna.  Derek’s considerable experience with Charlie Unsworth and at Blackwell’s Rare Books in Oxford will stand them in good stead. They have their own ideas. They are good ones.  Derek recently wrote in the ABA Newsletter, “The open shop is essential to the future of the rare book trade”.  How right that must be.  No doubt I have said it before, but it is shops and shops alone which create new collectors.  That first and overwhelming experience of real books and real people.  That moment of magic, of epiphany.  Book-fairs and the internet are at best for the already converted, the latter treacherous and imponderable for the beginner.

Derek went on to write that they aim “to offer good books of all kinds, secondhand as well as antiquarian and rare, with an emphasis on scholarship, intellectual history, and fine and early printing”.  There should be a place in every city for a shop such as this – there really should.  The Walkers also talk of a return to the old-fashioned printed catalogue.  Yes, please!  More to learn from these than any other source.  And this is not be wholly retrograde – of course cyberspace has much to offer too – Anna has professional experience in social media – we look forward to McNaughtan’s on Twitter.

Derek again: “Rare and collectable books are a luxury good that is actually good – and they need to inspire aspiration, not hide from those who aren’t already connoisseurs”.  Quite right.  I think Edinburgh may just be in luck.  Let us wish this new/old enterprise every success.  Get along there and see for yourselves.

Laurence Worms has owned and run Ash Rare Books since 1971. He represented the antiquarian book trade on the (British) National Book Committee from 1993 to 2002 and has been six times an elected member of the Council of the Antiquarian Booksellers’ Association. He was largely responsible for drafting the Association’s Code of Good Practice first introduced in 1997 (and its recent update), served as Honorary Secretary of the Association from 1998 to 2001 and as President from 2011 to 2013. He is a former member of the Council of the Bibliographical Society and continues to serve on the Council of the London Topographical Society. He writes and lectures on various aspects of the history of the book and map trades, and has lectured at the universities of Cambridge, London, Reading and Sheffield, as well as at the Bibliographical Society, the Royal Geographical Society, the Warburg Institute, the National Library of Scotland and at Gresham College and Stationers' Hall. He teaches annually at the London Rare Book School, University of London. Published work includes the compilation of fourteen ‘lives’ for the “Oxford Dictionary of National Biography”, a number of articles for “The Oxford Companion to the Book” and the chapter on early English maps and atlases for the fourth volume of “The Cambridge History of the Book in Britain”. Essays on the British map trade are also appearing in “The History of Cartography” published by the University of Chicago Press. His long-awaited “British Map Engravers”, co-written with Ashley Baynton-Williams, was published to critical acclaim in 2011. He also contributed the numerous biographical notes to Peter Barber’s hugely successful “London : A History in Maps”, co-published by the British Library and the London Topographical Society in 2012.
View all posts by Laurence Worms - Ash Rare Books →
This entry was posted in ABA, ABA Past Presidents, Book Collecting, Booksellers, Bookshops and tagged ABA Past Presidents, Anna Walker, Derek Walker, Edinburgh, Elizabeth Strong (McNaughtan’s Bookshop), Peter Miller. Bookmark the permalink.