Did She Die in Vain?

Detail of Castlereagh from George Cruikshank (see below).

Did she die in vain?  The answer to Tony Hancock’s question as to the fate of Magna Carta, the brave Hungarian peasant girl (which I’m pleased to see he is still posing in the British Library’s  new exhibition, Magna Carta: Law, Liberty, Legacy), is not one easily answered.  When we reflect that only two (three or four at most – a couple are debatable) of the original sixty-three clauses agreed between King John and the barons at Runnymede in 1215 still have legal force and have never been repealed, when we look at ongoing attempts to ignore even those – two telling caricatures here bearing an identical message from a couple of centuries apart – then we may have leave to doubt.

It is not as if the original document ever had much legal force in any case. Within weeks, the Pope had issued a bull declaring it “null and void of all validity for ever” – so much for papal infallibility (and, yes, if you ask, I do very much consider it a matter both of faith and morals).

King John having accepted the Pope’s feudal overlordship, that should perhaps have been an end of it.  This, I suppose, gives rise to the related question of why it would take another 300 years for the final breach with Rome to come about.  (Things emanating from Rome always seem to end badly on these shores – from Julius Caesar to the 1957 Treaty of Rome, which admittedly hasn’t ended badly quite just yet – but mark my words).

The version of Magna Carta which was eventually to become enshrined in English law was in fact the shorter 1525 version of Henry III – the one not accepted under duress – so perhaps we are all jumping the gun a little in celebrating an 800th anniversary, but the key point is that Clauses 39 and 40 of the 1215 version (the ones still having legal force) survive almost verbatim, combined together in the later document’s Clause 29.  I’ll give it here in a nineteenth-century translation from the Latin which has a bit more vigour than some of the insipid modern translations: 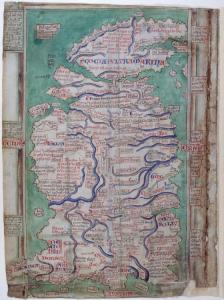 Commentators over many years have made us certain that what we take from these words now would not have been what they meant or were intended to mean at the time: this was a far-off world, as much and as little recognisable today as this contemporary map of England, Scotland and Wales by Matthew Paris – although Paris himself took a robust and fairly modern view of the death of King John – “Foul as it is, Hell itself is defiled by the fouler presence of John”.

To its original audience, the now ringing phrases of Magna Carta were probably just part of a list of specific remedies for specific grievances, all mixed in with perhaps more immediately pressing concerns over disseisin, mort d’ancestre, wainage, kydells, socage, burgage and scutage.  But words once written can come to have a spell of their own.  Although they certainly didn’t at the time promise trial by jury (it didn’t yet exist) or place any absolute ban on arbitrary detention, this is what over the centuries – by interpretation disguised as translation, by loud and frequent invocation, by precedent, and by common consent – they have come to mean.  Important to say too, that there is no guarantee of democracy here, King John was dealing with barons after all – it is at most a guarantee of the rule of law, but as Richard Godden of Linklater’s (who are sponsoring the exhibition) sagely says:  “It is common to encounter people confusing democracy with the Rule of Law. But history teaches us that, given the unpalatable choice, it would be better to choose the Rule of Law without democracy than democracy without the Rule of Law”.

George Cruikshank, Liberty Suspended! With the Bulwark of the Constitution! 1817. © Trustees of the British Museum.

The excellent exhibition at the British Library, admirably curated by Dr Claire Breay and Julian Harrison, tells the full story of how by accident of history this text surviving in a handful of copies of crabbed Latin manuscript on vellum has become both our birthright and the founding document of modern liberty.  It explores the precursor documents, including the unique copy of the Articles of the Barons, listing the original demands, and most of the subsequent variations and incorporations.  Astonishing to see Thomas Jefferson’s own manuscript of the Declaration of Independence (1776), with a passage later excised which would have abolished slavery in the United States from the outset had but Congress allowed it.  Alongside it, one of the dozen surviving copies of the American Bill of Rights (1789), also on loan from the United States. Elsewhere the English Bill of Rights (1689), I suppose the nearest thing we have to a written constitution.  Later on the Universal Declaration of Human Rights (1948) – and beyond these formal documents drawing on the Magna Carta legacy there is evidence all round of the movements which have drawn their inspiration from those founding principles – Chartists, Suffragettes, freedom campaigners everywhere across time and place.

The document’s iconic status did not come about all at once: noticeable that it doesn’t appear to be mentioned at all in Shakespeare’s The Life and Death of King John – and how much would we like to have Shakespeare’s take on Runnymede?  But even so, Magna Carta was already proving capable of dramatic surprises of its own.  It was first put into print (in Latin and Law French) by Richard Pynson in 1508 and then in an English translation (by George Ferrers) published by Robert Redman in 1534. The following year, Thomas More invoked it at his trial, apparently temporarily wrong-footing Thomas Cromwell.

The Boke of Magna Carta, with Diuers other Statutes. 1534. © British Library.

The exhibition has Cromwell’s memorandum to himself to “Remembre the Auncyent Cronycle of Magna Carta and how libera sit Cam into the Statute”.  Numerous subsequent instances of appeal to its protection abound and are fully reflected throughout the exhibition – notably in the case of the irrepressible John Wilkes, whose image on teapots brought Magna Carta into many a home.

The most chilling item in the exhibition is not the executioner’s axe, nor even King John’s teeth, but a letter circulated in the higher echelons of government in 1947 by one Kenneth William Blaxter,  Assistant Secretary in the Colonial Office.  Responding to a proposal to make June 15th a public holiday throughout the empire (and in the USA as well) – a Magna Carta Day to celebrate Western liberty – 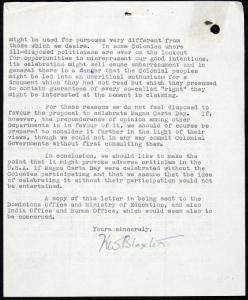 he cautioned that the holiday “might be used for purposes very different from those which we desire.  In some Colonies where ill-disposed politicians are ever on the lookout for opportunities to misrepresent our good intentions, its celebration might well cause embarrassment and in general there is a danger that the Colonial peoples might be led into an uncritical enthusiasm for a document which they had not read but which they presumed to contain guarantees of every so-called ‘right’ they might be interested at that moment in claiming”.  It’s the inverted commas around ‘right’ as much as the condescension that appals: I think we know which side he would have been lining up on at Runnymede – but he evidently got his way.

The exhibition ends with a passage through a dark corridor to the dimly lit shrine of the final exhibit – the vellum document itself (actually two copies of it, one illegible).  All rather hammy – as hammy as the old silent film of Beerbohm Tree hamming up King John for the first movie cameras ever to record a bit of Shakespeare (1899) – but at the same time genuinely and undeniably quite moving.

It’s not a matter of choice whether you go to this exhibition: it’s more or less mandatory.  You simply have to.  A pilgrimage you must make if you have any care at all for the important things in life and the potency of abstract principles.  We could probably have done without some of the props and gimmicks – the axe, the teeth, the bishop’s buskins or whatever they are – but other than that, it’s brilliant – as exposition, as exegesis, as exhibition. They are expecting record numbers, I’m pretty sure they will get them.

Laurence Worms has owned and run Ash Rare Books since 1971. He represented the antiquarian book trade on the (British) National Book Committee from 1993 to 2002 and has been six times an elected member of the Council of the Antiquarian Booksellers’ Association. He was largely responsible for drafting the Association’s Code of Good Practice first introduced in 1997 (and its recent update), served as Honorary Secretary of the Association from 1998 to 2001 and as President from 2011 to 2013. He is a former member of the Council of the Bibliographical Society and continues to serve on the Council of the London Topographical Society. He writes and lectures on various aspects of the history of the book and map trades, and has lectured at the universities of Cambridge, London, Reading and Sheffield, as well as at the Bibliographical Society, the Royal Geographical Society, the Warburg Institute, the National Library of Scotland and at Gresham College and Stationers' Hall. He teaches annually at the London Rare Book School, University of London. Published work includes the compilation of fourteen ‘lives’ for the “Oxford Dictionary of National Biography”, a number of articles for “The Oxford Companion to the Book” and the chapter on early English maps and atlases for the fourth volume of “The Cambridge History of the Book in Britain”. Essays on the British map trade are also appearing in “The History of Cartography” published by the University of Chicago Press. His long-awaited “British Map Engravers”, co-written with Ashley Baynton-Williams, was published to critical acclaim in 2011. He also contributed the numerous biographical notes to Peter Barber’s hugely successful “London : A History in Maps”, co-published by the British Library and the London Topographical Society in 2012.
View all posts by Laurence Worms - Ash Rare Books →
This entry was posted in Exhibitions, Libraries and tagged Magna Carta. Bookmark the permalink.