Feeling slightly usurped this week by an excellent book-hunting British safari blog-post from the Brooklyn-based Heather O’Donnell of Honey & Wax Booksellers.  Over here for the Olympia Fair, she took the opportunity of visiting booksellers in the north of England, Scotland and Dublin.  She had the advantage of course of being speedily chauffeured around by our mutual friend Steve Liddle (“I know the roads, I know where the books are, I don’t take prisoners”).  Read all about it on her website.

Now – where was I?  Off to Cecil Court with the Modern First Editions group from London Rare Books School.  An excellent afternoon.  Highlight for me was Ron Chapman (Tindley & Chapman) pretending to think that Angus O’Neill (Omega Bookshop) was a student on the course and had he learnt anything – but an afternoon full of wider interest too.  Glimpses of a couple of very high-powered booksellers in earnest conversations – a feeling of vultures circling over something special that might have just turned up.  We never got to find out what it may have been, but the booksellers of the Court really put themselves out to show off some treasures and to answer everyone’s questions.

David Headley (Goldsboro Books) took much appreciated time out from preparations for his Crime in the Court celebrations to talk about his unique blend of bookselling (books new and old) and literary agency – our group just as excited and interested as the rare book librarians had been a few weeks ago. 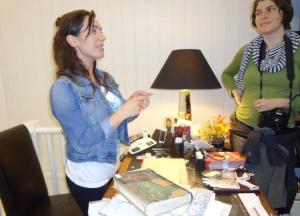 Natalie Galustian as enchanting and entertaining as always about her offbeat selection of themed books – had real trouble getting the students to move on to the next shop.

Stephen Poole had put on a delightful little display of things found in books – a letter from Betjeman, the boarding-passes of a well-known novelist and his wife used as bookmarks – wonderful stuff.

We found Kenneth Fuller (Marchpane) in his cluttered wonderland of children’s and illustrated books, interspersed with the odd and unexpected rare punk magazine (a topic on which Ken is a recognised authority).  Another bout of difficulty in getting everyone to move on.

Peter Ellis frank and forthright in his answers – and with some serious  observations of his own.  “It’s all, all of it, about the buying – buy the right books at the right price and they sell themselves” – a topic to discuss in class next day.

Back to Maggs Bros. for the evening reception – splendid (and so generous) as always.  We had been talking about McKnight Kauffer, that greatest of dust-jacket designers, earlier in the week – how splendid to see a couple of the students having a drink below that striking signboard he painted for the Poetry Bookshop in his time in London (photographs courtesy of Mary Russell).  “He did something for modern art with the public and something for the public with modern art”, as T. S. Eliot once noted.

The week almost done – a final session with Angus on marks of ownership.  Even I am left open-mouthed at one example he shows us (can’t tell you what, all very hush-hush – but just about as perfect an inscription as you could have).  Then the crunch.  At the start of the week I give all the students a mystery book – they have to come back on the last day with it researched and priced.  (These are obviously books that perhaps aren’t quite what they seem or can’t be looked up anywhere).  A few nerves, but no disasters: they all do pretty well with some impossible books – very well indeed in a couple of cases.

A great week – thank you to everyone involved.

Laurence Worms has owned and run Ash Rare Books since 1971. He represented the antiquarian book trade on the (British) National Book Committee from 1993 to 2002 and has been six times an elected member of the Council of the Antiquarian Booksellers’ Association. He was largely responsible for drafting the Association’s Code of Good Practice first introduced in 1997 (and its recent update), served as Honorary Secretary of the Association from 1998 to 2001 and as President from 2011 to 2013. He is a former member of the Council of the Bibliographical Society and continues to serve on the Council of the London Topographical Society. He writes and lectures on various aspects of the history of the book and map trades, and has lectured at the universities of Cambridge, London, Reading and Sheffield, as well as at the Bibliographical Society, the Royal Geographical Society, the Warburg Institute, the National Library of Scotland and at Gresham College and Stationers' Hall. He teaches annually at the London Rare Book School, University of London. Published work includes the compilation of fourteen ‘lives’ for the “Oxford Dictionary of National Biography”, a number of articles for “The Oxford Companion to the Book” and the chapter on early English maps and atlases for the fourth volume of “The Cambridge History of the Book in Britain”. Essays on the British map trade are also appearing in “The History of Cartography” published by the University of Chicago Press. His long-awaited “British Map Engravers”, co-written with Ashley Baynton-Williams, was published to critical acclaim in 2011. He also contributed the numerous biographical notes to Peter Barber’s hugely successful “London : A History in Maps”, co-published by the British Library and the London Topographical Society in 2012.
View all posts by Laurence Worms - Ash Rare Books →
This entry was posted in Book Collecting, Booksellers, Bookshops and tagged Cecil Court, David Headley, Honey & Wax Booksellers, Maggs Bros, Marchpane, Natalie Galustian, Peter Ellis, Stephen Poole, Steve Liddle, Tindley & Chapman. Bookmark the permalink.